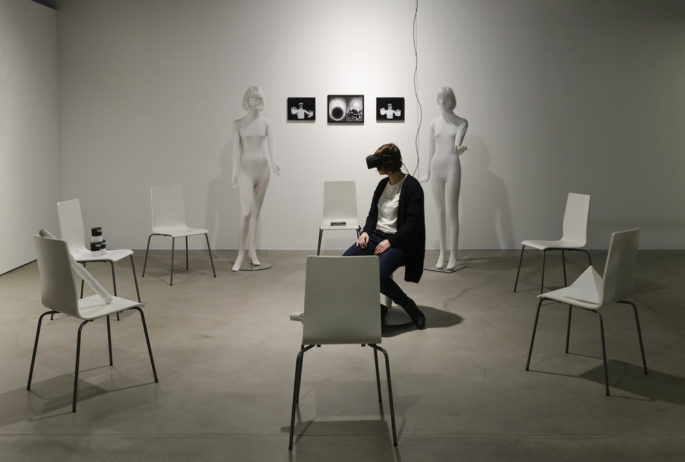 At the invitation of the Goethe-Institut curators Tina Sauerländer and Erandy Vergara have selected VR works for this year’s Toronto Digifest, including two recent pieces by Berlin-based Canadian artist Li Alin and Montreal-based artist Erin Gee in collaboration with South Korean-born, US-based artist Alex M. Lee. The artists use humor and irony to engage in controversial topics: emotions in first-person shooter video games and war in the case of Gee, and a futuristic exploration on human reproduction in technology-oriented times in the case of Alin.

The audience itself explores Gee’s H.E.A.R.T., a virtual work where you have to control your emotions to control the leading character in a war-related VR game, as well as Alin’s Enter Me Tonight, a VR environment engaged with issues on human reproduction, economy, biology, pornography and technology.

In a contextualizing event, the curators will speak about the history of VR and current trends and critical perspectives on this technology.

Berlin-based Tina Sauerländer works as an independent curator and writer. With her exhibition hub peer to space she has been organizing and curating international group exhibitions in various institutions throughout Europe. She currently deals with the artistic self-staging in digital art as a PhD candidate at the University of Art and Design in Linz, Austria.

Erandy Vergara curates and writes about contemporary and media art. Her main research interests include feminism, global art histories, curatorial studies, postcolonialism and critical race studies. She earned a MA at Concordia University and a PhD in Art History at McGill University.

Toronto’s Digifest is a tech festival and startup event, organized annually by the Digital Media and Gaming Incubator at George Brown College, bringing together thought leaders, entrepreneurs, designers, students and creatives engaged in the interactive, gaming and design industries.